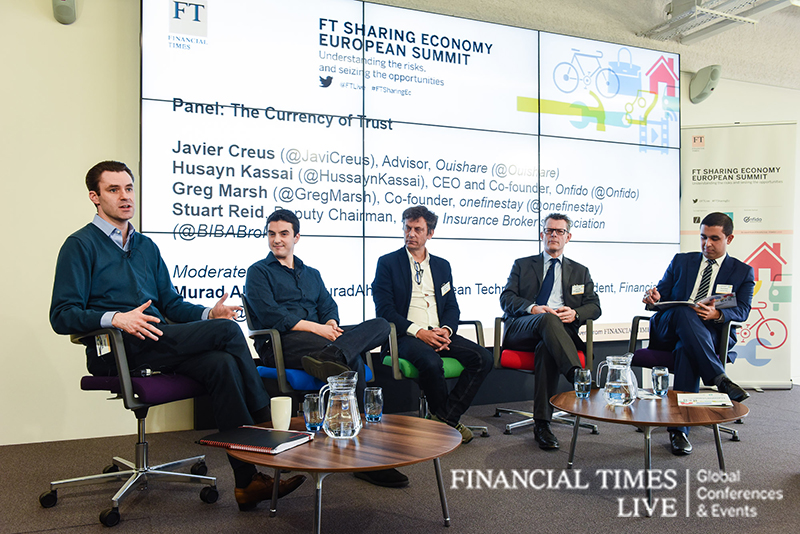 My experience of the Financial Times Sharing Economy European Summit felt like an intense but exciting ‘call to action’. Two days before the summit, I was about to sign a contract for a new job that I wasn’t really going to enjoy, when Ali Clabburn offered me a job at Liftshare, the UK’s most popular lift sharing platform. Ali had followed up after seeing my tweet about his talk at an ‘Excluded Communities and the Future of Sharing’ event in City Hall. This unusual way of getting a job was just a taster of how important sharing is becoming in the 21st century.

Being offered a job at Liftshare, an organisation operating at the forefront of the sharing economy, felt like striking gold. But it was not until Ali invited me along to the summit, at the top of the electrifying Canary Wharf Tower, that I realised that the sharing economy, with all its potential and promises, was not just something a few students and entrepreneurs had latched onto as an exciting social movement and opportunity. The sharing economy had reached a point where it was getting continuous attention from the likes of the Financial Times, and was persuading important politicians and businessmen worldwide that they too should not only be redefining their concerns and strategies, but that if they didn’t the consequences could be disadvantageous at best.

The first question I was faced with when entering Level 39 was ‘which of these people is not so important that they won’t mind a 23 year old (without Richard Branson as a LinkedIn contact) sitting next to them?’. Luckily, the familiar faces of the lovely London Ouishare team allowed me to cut my search short.

The event itself covered many issues that have accompanied the sharing economy ever since the term was born. For one, we discussed the issue of trust as the ever evolving problem that it is (this later allowed me to raise certain issues at a meeting discussing the GDS’s Verify project). Debbie Wosskow gave a great crash course on how the government could make the most of seemingly unstoppable sharing trends. Benita Matofska presented a enticing ‘reality check’ on just how profitable (both socially and economically) the sharing economy had become. Throughout, Sally Davies cleverly interrogated how businesses and the government could, and should, use rather than abuse sharing trends. After an indulgent lunch break, Alexandra Depledge woke us up promptly with a defensive yet grounded account of how her business, Hassle.com was not about luring vulnerable people into unreliable jobs. She also stressed how good customer service in the context of the sharing economy was still important to ‘turn frowns upside down’. Ali Clabburn left us reflecting on the fact that we share most in times of emergency, but sometimes seem to spot such emergencies when most the damage done (this certainly put into question the fact the government ditched plans at the 11th hour for a car sharing lane on the widened M1 in 2008).

I can’t concisely list all those speakers whose experiences, bravery and insights made me feel proactive for the first time since the day before my dissertation deadline, but Alex Stephany’s composed expression of the highs and lows of The Business of Sharing cannot be left without a mention.

All in all I’ve always been for sharing (I wrote my MDes Service Design dissertation on the topic), but a discussion of the sharing economy organised by the Financial Times did not frustrate the remnants of the ‘socialist Essex student’ inside me as much as I thought it might. If anything, I hope I could now provide a more informed and balanced argument as to how sharing could evolve as a truly social trend that is not incompatible with good business. Still, I hope ‘good business’ is here interpreted as ‘social’, rather than simply profitable.