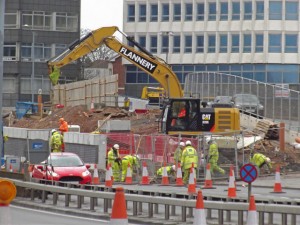 It’s a common problem, and one we’re all used to seeing when out and about on roads. Cones, signs, and temporary lights are the plague of the road, and sometimes seem never-ending. What’s worse, it’s on the rise, according to a new report published by LV=.

A Freedom of Information request issued by the insurer has revealed a 21% increase in current roadworks from last year. Of the councils who responded to the request, Argyll and Bute Council had a whopping 837 outstanding maintenance projects, Gloucestershire County Council had 734, and Rotherham Metropolitan Borough came third with 656.

In spite of all this and the fact that in 2014, each council across the country spent an average of £6 million on road maintenance, 55% of motorists feel the condition of roads in their area is getting worse.

And it’s not just local roads in your local area. According to motorists, the top 10 most frustrating motorways for roadworks were as follows;

This comes as no surprise, given that the improvement scheme at Junction 10a on the M1 was started back in October 2013 – and has yet to be completed.

So how does all this affect journeys? Well, 59% of motorists have had to change the route of their journey due to roadworks, and 70% have been subjected to traffic jams and delays. To add to these woes, 1 in 20 motorists have experienced a car breakdown as a result of roadworks, and almost a million drivers have had damage to their car.

Of course, drivers often can’t avoid roadworks and we can only hope that improvement schemes work out well and as planned. But, we can help putting less cars on the road by car sharing, as a way of minimising disruption.

You can travel with others by finding people travelling your way on Liftshare.com. As the UK’s biggest carsharing network, you can find drivers and passengers willing to split petrol costs and get sharing for a social, greener and more affordable journey.