This week saw outrage from commuters when train operator Southeastern blamed severe delays into London because of ‘strong sunlight’.

The unusual explanation for the rail delays was not accepted graciously by passengers and saw numerous spoofs across social media.

The rail firm tweeted: “We had severe congestion through Lewisham due to dispatching issues as a result of strong sunlight.”, adding “The low winter sun has been hitting the dispatch monitor which prevents the driver from being able to see”.

But travellers were understandably unimpressed by being late for work, and took to social media to express their frustration; 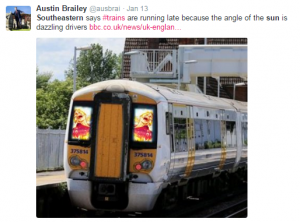 A spokesman for Southeastern explained “We know that sometimes it seems that if it is not leaves on the line or snow on the track then it is some other weather issue. But actually glare this morning made it impossible for some drivers to see the full length of their train in their mirrors before leaving stations. When this happens they have to get out and check to ensure everybody has got on or off the train safely before they can move. This can take a little more time but thankfully for all it doesn’t happen very often”.

A rare occurence, definitely, but do you think this should have caused delays? Let us know your thoughts on this story in the comments below!