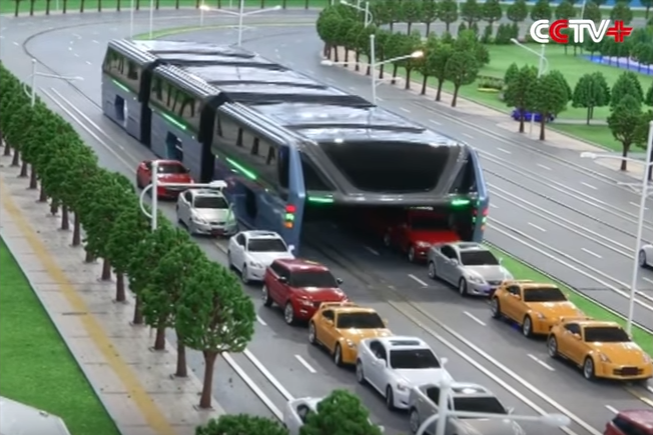 China Central Television have reported on a design for some ground-breaking new technology to ease the country’s transport issues – an elevated bus that travels over traffic to avoid congestion!

The Transit Elevated Bus (TEB) was unveiled at a tech expo this week in Beijing and, if actually developed, could be the answer to the major traffic jams that plague the country’s biggest cities. One such traffic jam lasted a whopping 10 days back in 2010!

Designs for the bus show a model that rides on tracks in an arch shape, allowing regular traffic to pass underneath it. It could carry up to 1,200 passengers, who exit at stations through the top of the vehicle or by lift for stations on street level.

Check out the video below to see the model version in action:

“With a carrying capacity of 1,200 people at a time, the TEB has the same functions as the subway while its cost of construction is less than one fifth that of the subway,” said Bai Zhiming, engineer in charge of the TEB project, continuing “and construction can be finished in one year”.

Would you be willing to try the TEB? And do you think it’s truly a bus? Let us know your thoughts in the comments below!