Following our blog on mobile phone use in cars reaching ‘epidemic proportions’ amongst the British public, we held a poll on Twitter to see how our followers’ views compared. And how did they? 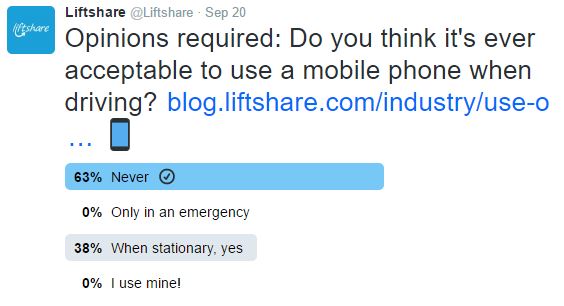 63% said it was never acceptable to use a mobile phone whilst driving, with the other 38% agreeing it was acceptable only whilst the vehicle was stationary.

Interestingly, not one of our Twitter followers admitted to using their phones whilst driving – despite the poll being anonymous. This is in real contrast with the full public survey, which revealed attitudes becoming more lax.

Also, no one admitted to finding it acceptable to use their phone in an emergency, and we received a tweet from someone ‘in the know’ in regards to this. Meet PC Jon Parker:

PC Parker is a Patrol Officer based in Fakenham, Norfolk, just up the road from Liftshare HQ. He raised a point that we thought interesting; and judging by the votes, one not many of us know about.

It is actually completely legal to use your mobile while driving in one instance – an emergency, where it would be unsafe for you to pull over, or if you are safely parked. You are allowed to call 999 or 112 for assistance in these situations only.

However, it’s really important for you to make sure this is actually the case before picking up your mobile. If police judge that you’re not in an acceptable situation to use the phone, you’ll receive an on-the-spot fine and 3 penalty points, and could be taken to court; even sometimes resulting in disqualification.

The safest way to call on the move is, of course, using a hands-free device. But even when using these, you need to remain focused on the road. If you’re believed to be too distracted by a call to drive safely, you can still be pulled over and have action taken against you.

So, there you have it. Whatever your personal opinion, there is an instance in which it’s legal to use a mobile phone at the wheel – although hopefully you’ll never need it! Of course, your Liftshare passenger could always make the call while you drive on to safety. Another great reason to have someone else in the car.

Did you already know of this exception to the rule? Let us know in the comments below!