From the simple fact that someone has joined Liftshare, you can be pretty sure they’re a friendly, open-minded person interested in saving a bit of money, helping the planet and meeting new people.

Still, Liftshare already has of over 500,000 users from all over the world, so it becomes tricky to appreciate all the interests, experiences and skills held by members of this fast growing community.

As Liftshare’s community manager, I have the opportunity of getting to know many of you. This has allowed me to come to the following conclusion: the Liftshare community has enough engineers, entrepreneurs and commuters fed up with public transport to beat Tesla in the race to build the driverless car. We also probably have enough designers to ensure it looks better than Google’s driverless koala-thing.

Thousands of different members, interests and skill sets means thousands of different professions. Some of my favourite examples include; Rebecca, the costume designer, Aaron, the magician, Mike, the tree surgeon and Jordon the famous money-saver. Oh and Jonathan who builds swimming pools in the south of France. Sounds splashing.

Since I have a passion for maps, Nathan’s biography also caught my eye; “I work at the University of Bristol helping community groups build history maps online and researching new approaches to tackling gender-based violence”.

Many of you also have intriguing hobbies. 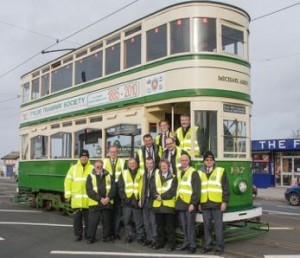 Malcolm from Southport, for example, recently joined the Blackpool Heritage Tramway operation as a volunteer tram driver. “I’ve been a transport enthusiast as long as I can remember, with a particular interest in trams because I saw them when on holiday in Sheffield in the 1950s and 60s”, Malcolm told me.

Tina ran a non-profit Star Trek fan club in Banbury during the 90s, and recently looked after the five original bounty hunters from Star Wars.

Katrina is a tour guide and pastry chef “passionate about travelling and chocolate”. In light of this I’m confident that Katrina and I would make a great Liftshare match. So much so that I’d secretly hope we get stuck in a spot of traffic. Speaking of which, check out these traffic light cakes.

How can you benefit from this incredible range of people in your community?

Well other than meeting new people and hearing great stories, you could find yourself sharing a lift in Andrew’s brand new black Maserati Ghibli V6 with heated seats.

Or you might be after a more humbling experience. For that, you could liftshare with Zsofia, a documentary photographer whose brilliant project on refugees and Syrian war deserved its own guest post.

Conclusion? The Liftshare community is broad with brilliance, so don’t miss out – update your profile, offer or request a journey and get to know each other!