What if a headgear could analyse brain waves and alert the driver at least three to five minutes before they doze off at the wheel?

Sounds like a really big deal when we consider this:

According to the Royal Society for the Prevention of Accidents, driver fatigue/sleepiness may be a contributory factor in up to 20% of road accidents, and up to one quarter of fatal and serious accidents. Sleepiness reduces reaction time, reduces vigilance, alertness and concentration. These can affect the speed at which information is processed and the quality of decision-making.

The Alert Band, is a wearable fatigue detector band that attaches to the driver’s forehead to sense fatigue and help prevent accidents. 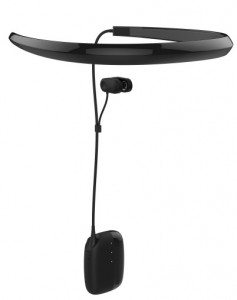 Unveiled by Impecca at the CES Show in Las vegas, the early warning system uses Bluetooth 4.0 technology to monitor and analyse brainwaves, sending real-time notifications and alarms to the driver and their family and friends, 3-5 minutes before the driver begins to doze off. The developer thought about the idea after a friend was severely injured in a car accident when the driver who hit him fell asleep behind the wheel.

The device underwent years of testing with hundreds of participants using a simulator, claiming over 90% accuracy rate.

So how does it work?  The Alert Band features a smartphone App and the raw data collected from the forehead sensor is transmitted to the app in real-time. The app then uses a numbering system from 0 to 100, where 0 indicates fully awake and 100 means the driver should not be driving in the current state.

Impecca has designed the product keeping versatility in mind, which means the Alert Band can be useful for drivers of surface vehicles like cars, trucks, taxis, underground, buses, as well as those covering long distances, including pilots, sales people, vacationers, commuters and people with sleep deficiencies like insomnia and sleep apnea.

The tech blogs like @trendhunter are already talking about it. @Chip_Chick makes a point that ‘’everyone knows about the dangers of drunk driving, but the dangers of fatigued driving are just as glaring’’.

We can’t wait to get our hands on this gadget. Considering that many liftshare journeys are long journeys on monotonous roads, such as motorways, these gadgets are always of interest to us. It’s technology put to very good use when unfortunate accidents continue to claim more and more lives on our roads.

What do you think? Have an opinion, thoughts or advice on safe driving to share with the community?