Liftshare members regularly travel to UK festivals each year. But whether they’re going to the sprawling epicness that is Glastonbury, or smaller community-led events like the wonderful Village Pump Folk Festival, waste and green concerns are being cast under greater scrutiny than ever before.

That’s why we always encourage our members to travel together via car shares to keep carbon emissions down, but travel aside, there are countless other green factors event organisers need to consider when keeping the impact of their festival down each year.

Abandonded tents are one such issue – among many others – and this is exactly why UK site Camplight was established. The scheme aims to reduce the number of non-biodegradable tents left at festivals each year by revellers who either can’t be bothered packing them up, or those that have broken and are no longer of use.

The site’s volunteers repurpose abandoned tents left by revellers – fixing broken parts, santising them thoroughly and offering them again at other festivals. Camplight’s tents come pre-pitched and ready for you on the day and are then packed up by staff and reused over and over. It also costs far less than buying a new tent, with a starting price of just £10 per person or night.

We liked the idea so much, we got in touch with Camplight founder Kieran to learn more, and to discuss where this novel concept came from.

Take it away Kieran! 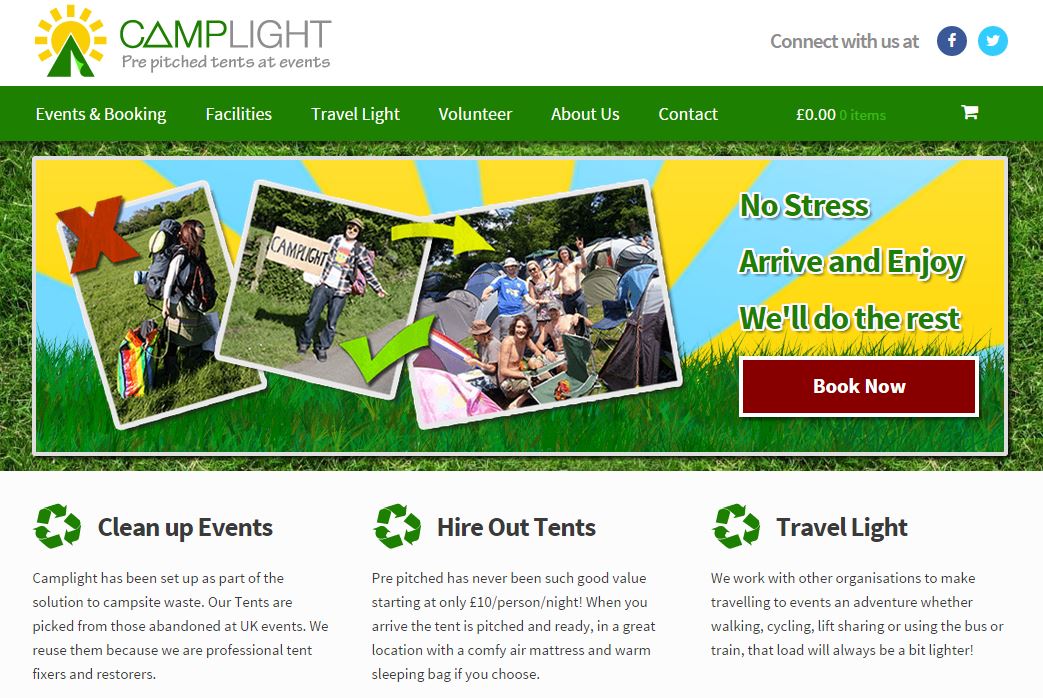 Liftshare: Can you give us some insight into how Camplight started and how the process works?

Kieran: I grew up around Glastonbury festival within a mile of the fence and have seen it every year growing up. I saw the mess left year upon year and eventually helped with clearing it up. From my work in the recycling and sustainability industries I learned about up-cycling and circular economies.

I realised that everything I needed to run a pre pitched campsite was already in the campsite, so I began to pick it up and learn about how to fix, clean, store, organise, transport and restore all the equipment. But my main goal remains prevention, not just a cure. That is why I set my prices so low that I don’t compete with Glamping, but with the cheap tents that people bring to an event just to leave behind. Because of that now revellers can book a tent at an event for only £10 per person or night.

Liftshare: How challenging is it to get Camplight into festivals and what does it suggest to you that more and more of them are coming around to the idea?

Kieran: Getting into new events is very challenging because event organisers are so busy and are keen to stick to what they know. However, rising clear-up costs and public pressure are leading large events to admit they have a problem and that green events can always go further to the circular economy.

Overall, I do hope that event organisers will begin to realise that people who have the money will want the Glamping option, whereas the rest of the revellers will still pay a bit for an easy and green option like Camplight. This gives the event organisers a chance to turn their camp fields into revenue rather than cost.

Liftshare: Just how big a green issue are abandoned tents at festivals?

Kieran: How many tents are left at UK events every year? In a nutshell, no one knows. Why? Because it’s a lot. A lot a lot. Counting them would be nearly impossible and generally go unpaid. This is not to mention the clothes, unopened food, toiletries and bedding left behind of course.

The fact is we are running out of landfills in England to fill. We can always burn the waste but plastics aren’t the best things to be burning on a massive scale either. I have heard knowledgable people say that the environmental impact of the landfill of the camp waste is not as damaging as fuel burned in the transport, but that is of course why its so good for Camplight to convey a Travel light message as well, and team up with someone like Liftshare.

Liftshare: Can you give us some insight into your year ahead and what new festivals Camplight will be pairing with?

Kieran: We launched our new site onin February, and now we are sorting out crew for all our returning festivals and new ones like Camp Bestival, Shambala and NASS. Then we will further explore turning Camplight in to a co-operative because it fits our cause of clearing up events. Just before the event season kicks off we will be looking for great volunteers to make it all possible.

We are looking forward to finding some of these through other organisation like Liftshare, The Young Green Party, Colleges and Universities and groups like Feststaff. After all that, most of our time is soaked up preparing for the big events we serve like Glastonbury and Bestival but they are basically the ones that support us at present. We would love it if more people who have stayed with us before to go and explore some of the smaller events we serve like Green Gathering, Whirly Fayre and Noz Stock.

Thanks for your time Kieran, and if you are concerned about waste or you simply don’t want the hassle of paying for – or putting up – your own expensive tent, try the next best thing and pay for a Camplight tent instead. Do you think this is a great idea? Let us know what you think below.