Since Liftshare.com launched from a student flat in Bristol nearly 18 years ago, lots has changed. The ‘sharing economy’ has become a worldwide phenomenen, James Corden and Peter Kay have made sharing trips cool, and there are now half a million current members and over 700 companies using Liftshare. Not bad, considering it all began when founder Ali Clabburn couldn’t afford to get home from uni for Christmas, and so stuck a post-it up on a Student Union noticeboard asking for a lift! 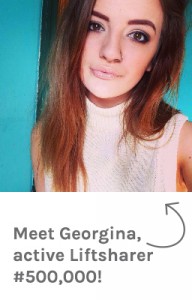 When Georgina joined this month, she became member number 500,000, and she’s an Oxfam Steward this summer – volunteering at Glastonbury to raise funds for the charity and help festival-goers, in exchange for tickets. (If you’re interested in doing the same, check out our blog on how it all works, and how you can get involved by clicking here!)

Oxfam Stewards have their own Liftshare group, set up for volunteers to travel together to and from festivals all over the UK. It’s a great way to get to know other staff early on, and to start the drive as a proper road trip; as well as keeping the sites as green as possible, of course.

So what other numbers make up Liftshare’s story so far?

Liftshare launched in Bristol on 21st August 1998 – 2 weeks before Google!

500,000 people are currently in the Liftshare network via Liftshare.com or through one of our workplace or regional schemes. That’s more than double the entire population of Iceland! We’ve also had a further 285,000 join who no longer need our help – they were either just testing the service, or have moved job, found a match or found another way to travel.

We work with over 700 amazing companies, who between them:

Save 673 tonnes of CO2 weekly, or 35,000 annually, which is an amazing environmental benefit. That weighs as much as 7,403 baby elephants, a week. But you probably don’t have much call for baby elephants, so to put it in more relevant terms… that’s the equivalent of powering 3,696 homes worth of energy for a year, 9 wind turbines being installed, or taking 7,393 cars off the road for a year!

You can work out exactly how much you could save by sharing your trips on our new Savings Calculator. Give it a go now, and then offer out the spare seats for your next trip!

We are on a mission to solve transport poverty, and you can help. If you know of anyone or any business who we might be able to help then please point them our way!