Time is flying by in my 30 Day Sharing Challenge for November, as I try and share something different each day. Here’s a quick round-up of my third week and what I got up to each day! 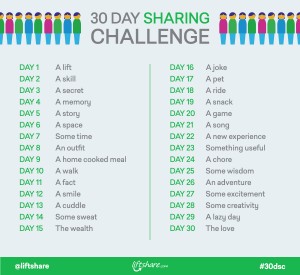 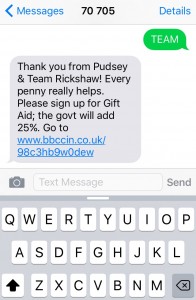 Sharing the wealth was an easy one for me, although a little belated for the cause I was going to donate to! I donated to the BBC Children In Need appeal, which had taken place 2 days before on Friday 13th November. On the night, the appeal raised £37m, but you can still donate afterward, and as I’d missed most of the coverage, I did just that!

I chose to support the Rickshaw Challenge, a fundraising attempt by six young riders to cover a 470 mile trip. Their journey was shown throughout the week prior to the main telethon on the One Show, and it made me really well up more than once. The riders were Amira, who’s sister had received care from The Children’s Trust, Elliot, a blood cancer survivor who was supported by Teens Unite, riding in memory of his friend Sadie, and George D, who was helped by the Woking and Sam Beare Hospices following the bereavement he suffered when his Dad passed away. Joining them were Erin, who suffers from arthritis and works with Arthritis Care Scotland, Lucy, who does great work with the Cramlington Voluntary Youth Project, and the gorgeous George D, who has Downs Syndrome and is involved with Pro Corda.

If you didn’t manage to catch up with how the riders got on, then watch it back on the BBC iPlayer. They all did an incredible job and the £3.4m they raised was very well deserved. 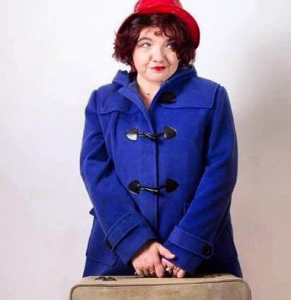 Here at Liftshare HQ, we ran a competition in the summer alongside Edinburgh Festival Fringe comedians, encouraging performers to talk about green issues and highlight the benefits of liftsharing to the events, as Edinburgh often suffers from traffic congestion. So, I shared my personal favourite of those involved, Daphna Baram. Watch her entry by clicking here!

There were lots of video entries peppered full of car and environment-related jokes, which you can watch on the Liftshare YouTube channel. And, you can check out the winner, Jonny Fluffypunk, on our blog. 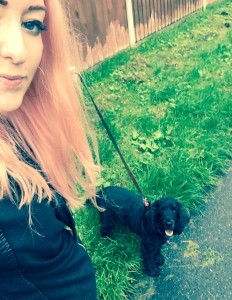 BorrowMyDoggy.com is a real success story of the sharing economy – allowing those without furry friends to walk others, and giving a great way for dog owners to ensure their pooches get plenty of exercise and are well socialised! I’ve been a member of the site for almost a year now, but aren’t currently ‘borrowing’ at the moment.

But, not to disregard my day, I instead helped out by walking Matt’s parents dog, Bosley. It only took half an hour and Bos’ excitement meant that I got just as much exercise as he did! He even posed for a selfie to show off his new pal. Thanks, Bos. 🙂

Sharing a ride raises a whole host of possibilities, but I decided to get a bit more active than usual. A few of my friends are quite into bike riding (an interest that I don’t really share, I’m much more of a gym girl), and so I went along on a short, easy ride on the 18th.

I was a bit wobbly, but managed not to fall off (that anyone saw), and thankfully Storm Barney didn’t hit quite early enough to pelt me with rain and leaves. It was nice to see my friends, but not necessarily something I’ll be getting into the habit of! 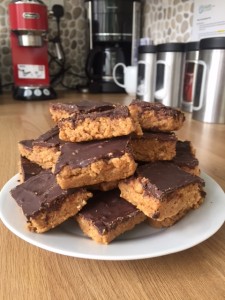 Sharing a snack was an easy job for me, as I always have a desk full of food in the office and so really all I have to do is let people pinch my cereal bars without telling them off!

I was feeling a bit Mary Berry the night before, although perhaps a little less inventive, and so found an old favourite recipe of mine – Lorraine Pascal’s chocolate peanut butter squares! I made up a batch, left them in the office kitchen and e-mailed everyone… and funnily enough, by the time I checked up on them, they were all gone. And I was much more popular with my colleagues 😉 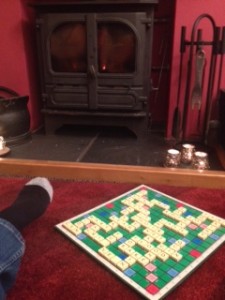 I was begged to play Fifa for day 20, but managed to abstain by spending the evening at my Mum’s and playing scrabble (and feeling a lot more intellectual for it!).

I lost, but needless to say, it was nice to have a couple of hours in front of the fire doing a bit of brain training. I guess now, I’ve just got to up my skill level. Or convince my mother to play Cards Against Humanity. One may be more difficult than the other…

If you’re in Norwich like me, you can get involved with the Community Sports Foundation to share a more active type of game. If not, Sport England are always looking for help, and for less sports gaming, the UK Games Expo need volunteer staff for 2016!

Deciding against producing my own carpool kareoke, I instead picked my favourite Liftshare related song. See below…

So, week 3 is DONE! Now it’s time for the final stretch…