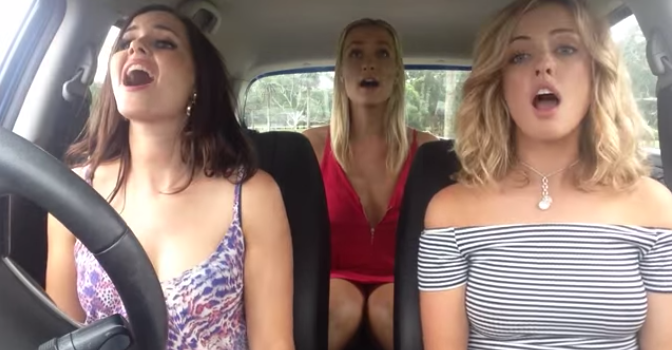 We’re sure many of you out there have been in a car with friends or colleagues when something completely hilarious happened. Maybe someone told a legendary joke, or you started singing along to a song on the radio?

The fact is, if you get people together in a car for long enough, something funny is bound to happen eventually, and thanks to mobile phones and GoPro cameras we’ve got even more ways to document these random moments as they happen.

Enter YouTube: which we know needs zero introduction. Whether it’s keyboard cat videos or clips of people doing the ice bucket challenge, you don’t have to look far to find something funny on there. But what about funny cars videos? (Liftshare is in the car sharing business after all!)

Well, we did some digging and found ten absolutely brilliant YouTube videos shot from within cars that you really need to watch, and remember, if you have your own personal story of funny or memorable car shares, we’d love to hear them at superheroes@liftshare.com.

David After Dentist by booba1234

This is a classic, in which young David is riding home after a trip to the dentist. He’s just had a dose of anaesthetic and it’s having some profound effects on the poor lad. His dad talks him through the ordeal, which sees him asking what’s happening to him, why he only has two fingers and if what is happening is – in fact – real life. The poor soul…

Australian comedy troupe SketchShe recently turned heads with this in-car miming of Queen’s mega-classic Bohemian Rhapsody, which comes complete with an interpretive dance number and that classic bit where the guitar distorition kicks in near the end (you know the bit we mean). We’d be surprised if most of you hadn’t head-banged to this track in a car before. Give this a watch at any rate.

Bonia and Kuzmich by Bonya Kuzmich

Imitation is the sincerest form of flattery (we think…), but this Russian parody of SketchShe’s car sing-a-long goes above and beyond. You’ve got multiple songs, costumes, light shows and more, all in the comfort of a car. The track list is amazing, with the likes of Aqua’s Barbie Girl, Michael Jackson’s Thriller and Taylor Swift’s Shake it Off. It’s like the ultimate festival road trip x10000. Get this one watched people.

Ah Frozen’s ‘Let it Go.’ Will it ever die? Do we even want it to? Whatever your view on Disney’s unstoppable juggernaut, this video of three-year-old Blakely and her dad Billy singing a duet of the song has attracted over 15 million views when we wrote this list, and to be fair, the wee singer really does belt it out while her dad freestyles over the top. Top marks for effort there Blakely!

Oh dear, the sheer terror! One second this group of tourists are driving through a lovely sunny safari park, and the next they’re being car-jacked by actual lions. Well OK, maybe not car-jacked, but admit it: you’d be pretty terrified for at least a split second if a full-grown lion almost got into your car share. Have a look at their reaction too, it’s priceless!

Meet Eric: he’s just been on his bachelor party out of town with friends, and after a heavy night of fun, they’ve all piled back into their vehicle to road trip home. Little does Eric know, that his ‘friends’ have one last surprise lined up for him. Just watch.

James Corden is fond of interviewing people in cars. We recently blogged about his car share videos with Justin Bieber, Mariah Carey and Jennifer Hudson (watch them, they’re pure gold), but this clip of James trying to interview Lewis Hamilton at high speed is classic. Just as the questions begin, Lewis kicks his motor into high gear and James crumbles under the pressure. Could you handle it?

You can start your own car share adventure by joining Liftshare for free and sharing a trip with one of our 430,000+ members today. Simply sign up, offer or request a lift and start travelling. Our new iOS and Android apps make finding that perfect lift even easier. Hop on board!