The Masked Ball is set to kick off the summer’s festival line-up in true style. From May 20-22nd, Porthleven in Cornwall will become a festival utopia like no other – with hundreds of performers across 12 curated stages.

This isn’t like any festival that you’ve been to before. It’s a spectacularly themed festival that by its own admission has grown into a ‘multilevel party kingdom where themed venues range from outrageous to downright unsavoury and spectacular, where a mélange of fascinating entertainment emanates from the many nooks and crannies in the ultimate ringmaster’s den of iniquity’. You’ll find myriad rooms, dens, dance floors, hidden bars, bathtubs, world-class dance clubs and an unrivalled line-up of international DJs.

This year, Basement Jaxx and Jungle headline with DJ sets, and are joined by one hell of a supporting line-up… including Julio Bashmore, Mike Skinner, Ben Pearce, Paul Woodford, B.traits, and PBR Streetgang. 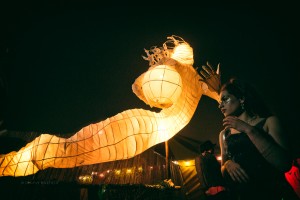 In the theme of decadence and elegance, each area of the festival is named after a stately home, including The Grand Ball Room, The Drawing Room, and The Study. To add to this, each of the three days of the festival is themed differently. Feast Friday sees a long table in the Grand Ball Room so you can dine and chat before heading to the main stage. Celebration Saturday is the main party, when masked revellers dressed to the nines party all night. And finally, Survivor Sunday hosts the morning-after-the-night-before party, where only the most die-hard will be able to continue.

The Masked Ball takes place in Cornwall, and in order to help keep congestion down and maintain the beautiful site, they encourage festival goers to liftshare. Visit The Masked Ball Liftshare site now to offer or book your ride there/back!