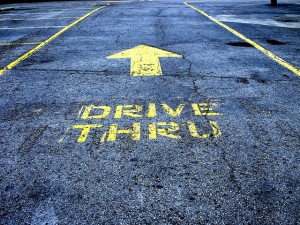 Need to spice up your car share a little bit? Forget the usual fast food drive-thru, the North Americans have really branched out when it comes to things you can pick up while in your car.

Check out this list of weird and wonderful drive-thrus from across the pond.

It may be illegal to drink and drive, but it’s not illegal to shop for alcohol while driving. The US has several drive-thru ‘liquor stores’ and the trend seems to have spread across the ocean to Northern Ireland, which now boasts a drive-thru off-license in Enniskillen. It’s certainly quicker than nipping in to the supermarket while on your way somewhere!

Now legal in several states in the US, drive-thru voting is gaining popularity as a quick and easy alternative to both attending a polling station in person and postal voting. There are, however, some concerns over safety and security of the booths, so this is still a pretty new concept that requires development.

OK, so this is one you probably shouldn’t take your liftsharer to. A Californian funeral home started this trend by setting up a drive-thru memorial box for your cards or donations, followed by curtains opening over the casket for three minutes for you to pay your respects.

Believe it or not, it’s actually quite popular, and has been replicated elsewhere across the US. Lafayette Gatling, owner of a Michigan funeral home, told the Chicago Tribune; “When you go to McDonalds [drive-thru], you can’t see what you’re going to get. Here, you can see what you’re asking to see”.

Stanford Hospital in California trialled a drive-thru Emergency Room for patients who showed signs of being contagious while in the waiting room. In a real-life, non-trial situation, this would work by having patients drive-thru and be triaged by a nurse before receiving treatment from a doctor. This would greatly reduce the risk of cross-contamination and help reduce waiting times.

A drive-thru that’s now made its way across to the UK; banks with vehicle lanes have popped up across the country. Most only allow you to withdraw or deposit money into your account, but as attitudes mature towards this new function, more and more should become available. That said, this has been tried before unsuccessfully by Martin’s Bank in 1959, and HSBC shelved similar plans in the late 00s. Use it or lose it!

Drive-thru prayer booths are gaining popularity in a number of US states, offering drivers and passengers alike the chance to take some time out and speak to church members or officials. Lots of these services are run by volunteer members of the church, and they’ll pray with you on any issue you like – even if it’s just a bad day. The Main Place Christian Fellowship in Los Angeles also give out free guidance leaflets, Bibles, bottles of water and flowers.

The World’s first drive-thru window for a law firm opened in Conneticut in 2010 when a legal business moved into a former restaurant building. They kept the window, and have manned it with a paralegal, so that clients of the firm can pick up and drop off forms, cheques and ask quick questions. For legal advice, however, you still have to leave the car.

8 Books from the library

Ottawa Public Library in Canada opened a drive-thru window in 2005 for readers to drop off their books around the clock, in order to avoid pesky charges and queues inside. This idea has now been copied all over North America, including in Westerville OH, Middlesex County NJ, and Des Moines IA. If your local library picks up this idea, it might be time to start thinking about setting up a book club with your fellow sharers!

You’ll need to be pretty close to your liftsharer for this one! Famous in Vegas, drive-thru wedding chapels offer a variety of packages and cars for you to get married on your travels through the party capital. Go ‘Britney’ and get the most efficient service – the deed can be done within four minutes!

Hopefully a service you won’t need often, if ever, but in Oregon in 2010, Craig Brown didn’t want to wait for an emergency call-out when the engine of his pick-up truck burst into flames. Instead, he drove to the fire station and firefighters simply hosed him down as he entered the car park. Not recommended, but a speedy service none the less.

If you don’t fancy driving alone, or indeed would like a lift from someone else (perhaps not to the drive-thrus listed above), you can find someone else going your way on Liftshare.com. It’s cheaper than public transport, is a great way to meet new people and saves carbon too!