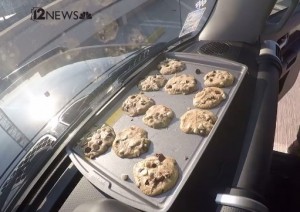 It’s already looking to be a hot summer in Arizona, and local news station 12 News have followed in the footsteps of YouTube chef Haim Cohen, by cooking in their cars. As temperatures hit 115 degrees (that’s 46c!), it seemed a good idea to try out.

But, where Haim’s recent video was actually a stunt to highlight the dangers of leaving children in hot cars, the 12 News Team have actually successfully baked in the heat – and produced 10 yummy double-choc cookies that cooked in the heat over 5 hours.

It got so hot in the car that at one point the channel’s GoPro actually stopped working, but below you can see a 5hr time-lapse video of the cookies before they’re taken out and enjoyed by the news team.

Of course, we’d prefer you pop on the A/C and open the windows so as not to toast your Liftsharer, but if you fancy trying new things in cars, why not look for someone to join you on your travels through Liftshare.com? You can meet new people, decrease your carbon footprint, and make some money toward your petrol costs.