The Manchester Evening News has the story of a drunk Conservative conference going student who woke up with a £311 bill to pay.

The young Tory was in Manchester, following George Osborne’s speech to the party, went out on the town to celebrate. He wrote on Facebook;

Went out in Manchester, woke up in London.

Checked my emails to see a £311 Uber journey. Must have been an interesting night”.

The situation would have been different with Liftshare. Liftshare drivers only have to car share with who they want too. Potential passenger looks drunk? Don’t let them into your car. Car sharing isn’t an on demand service either, passengers and drivers agree in advance where they’re going, how much it would cost and when the pick-up time will be. Who wants to be dealing with short notice bookings at 2am if you’d rather be tucked up in bed?

Since we mentioned cost let’s take a look. How much would it cost to car share from Manchester to London. Uber’s pretty cheap so can we beat their price?

Easily! Whereas an Uber from Manchester to London costs over £300 a Liftshare on the same route costs about £15. There are cheaper options and slightly more expensive ones available in the system at the time of writing along with a whole bunch of people looking for lifts. 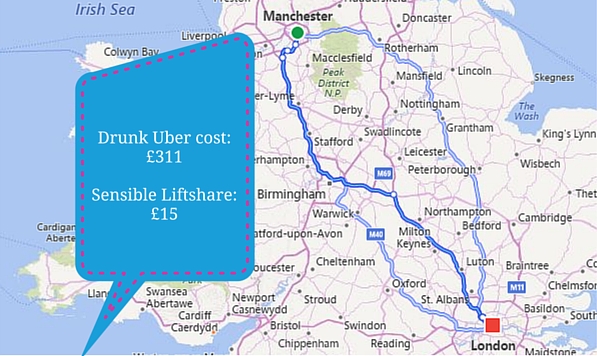 Liftshare is the sensible alternative. Ironically enough, this young student is also a member of Conservative Futures and once gave a speech on the rising cost of transport for young adults. Seems like he should have known better.