Washington State Police have confirmed that they’ve given a ticket to a Halloween trickster who tried to gain access to the state’s HOV (High Occupancy Vehicle) carpooling lanes – by filling his spare seat with a monster baby doll toy. 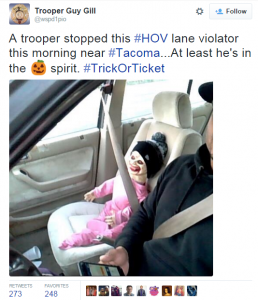 The lanes are used to try and reduce congestion around the state, and mean that at least two people must be in the car at all times. And they’re popular – with this proving just how far commuters will go to ride in the faster lane!

The law states; “Drivers can use HOV lanes whenever there are two or more people (including the driver) in the vehicle. The definition of ‘people’ is not limited by age or licensing status”. As the doll is not an actual person, the driver was fined $136 for violating the code. Police noted in later tweets that they gave the commuter a break for not using a car seat.

Better make sure your liftshare is actually under their mask before you ride this Halloween…!