She’s stolen the nation’s hearts as Kayleigh in Peter Kay’s Car Share series, and now she’s even won a BAFTA for her part in the script-writing of it – but who is Sian Gibson, and why hadn’t you heard of her before Car Share? Well, it turns out that there’s no reason you would have recognised her from other acting jobs – because she hadn’t had anything other than extras roles and a brief Hollyoaks cameo!

39 year old Sian studied Performing Arts at the University of Salford, where she met Peter Kay, who’s now godparent to her daughter, Gracie.

But she was working at a call centre in a temporary role when Peter contacted her and asked her to help script-write, and act in, Car Share. And rather than tell her bosses, Sian told them she had to leave due to issues with child-care for her daughter! “If I had said I was leaving to go and write a comedy with Peter Kay about two people sat in a car they would think I had gone mad. People at work didn’t know I was an actress or that I knew Peter”, she says, “They just thought that I was a mum with a young kid trying to make ends meet. I liked it that way”.

The Card One Banking call c 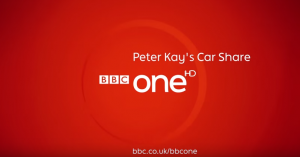 entre she was based in isn’t far from her home in North Wales, where she lives with her husband, Ian, who works for British Gas, and their daughter Gracie. Sian’s parents, Gaynor and Ted, are just 5 minutes down the road.

It was always hoped that the call centre would be a short-term arrangement, but ended up lasting 4 years. Sian speaks highly of her colleaugues there though, saying, “I was really rubbish at my job, I didn’t even try – it was a lovely place and people were lovely, it just wasn’t for me sat in office all day. I think I only stayed so long because I liked the toasties from the garden centre next door!”

Peter e-mailed Sian out of the blue and asked simply if she’d be interested in working on the series – and she didn’t hesitate! She quit her job and began writing, and 2 years later, the series hit screens on BBC1.

By the time Kay e-mailed, Sian hadn’t auditioned for any acting roles for over a year, saying that she had lost her confidence after so many rejections. “I didn’t even tell any of the mums on the school run Car Share was on and that I was in it”, she said in a recent interview, adding “It’s all been a bit mental. I can’t quite get my head around it. I didn’t expect Car Share to be as massive or successful as it was.”

Indeed even at the last minute, the whole thing almost didn’t happen, with Sian admitting she had jitters; “It sounds crazy but I suddenly thought Sheridan Smith or Suranne Jones could have done Kayleigh standing on their head. Nerves sort of got to me. I wasn’t nervous about working with Peter. It was the biggest thing I have ever done and I was nervous about letting him down.”

…and thank goodness she didn’t back out, because we think Kayleigh’s perfect as she is!

Series 2 of Car Share has now been confirmed for 2017, and you can watch outtakes from series 1 on our blog. Are you looking forward to further adventures with John, Kayleigh and maybe even Ron? We definitely are!

Of course, you can book your own carshare adventures over on Liftshare.com, either by offering or requesting a lift.