We’re firmly into week two of the Edinburgh Festival Fringe, and we’ve had a steady stream of acts submitting entries to our inaugural green comedy award.

The Liftshare Festival Fringe Award was started as a way for festival performers to send us videos of themselves talking about their green views, encouraging their fans to think green and of course – be in with a chance to win a new comedy accolade.

We’ve had a steady stream of entries so far, from the likes of Moj Taylor, Hilary Fox, Daphna Baram and Jonny Fluffypunk – with more to follow on the blog soon! But today we’re talking about our celebrity comedian judge, the musical and laughter tour de force that is Jonny Awsum: 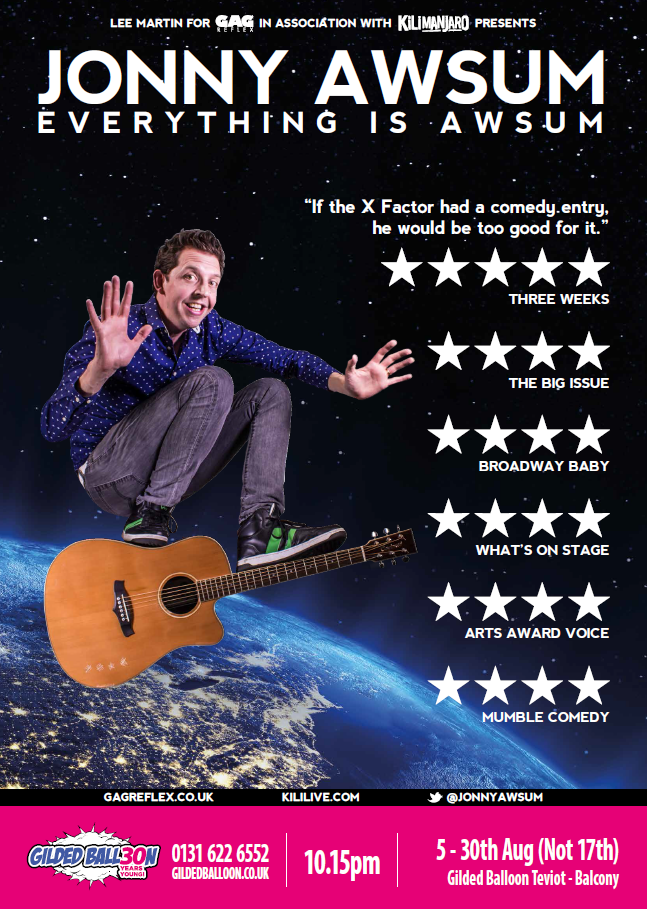 Jonny will be checking out our award shortlist after our August 21st closing date, along with other members of our panel, including Creative Scotland’s Janine Matheson, Colin Gilchrist at Social Tailor and Joe Tree from Scottish Enterprise.

As you might have guessed, Jonny is a musical comedian, and his hour-long show is filled to bursting with hilarious jokes and improv songs that are as catchy as they are funny. He’s well worth checking out while you’re at the Edinburgh Fringe.

If Jonny appears familiar, it’s because he’s doing lots recently, such as warming up the audience on Loose Women and Big Brother, playing the main stage at the Silverstone Classic and touring as the opening act for Paul Hollywood. He’s also presented on Sky Sports and starred in Cravendale’s award-winning ‘Cats with Thumbs’ advert.

See if you can spot him:

Liftshare wants to say a huge thank you to Jonny and his team for getting involved and helping us pick our winner soon. Go and see his show if you’re in the capital this August, you won’t be disappointed!

And if you need cheaper travel to Edinburgh, check out lifts offered by our community here.